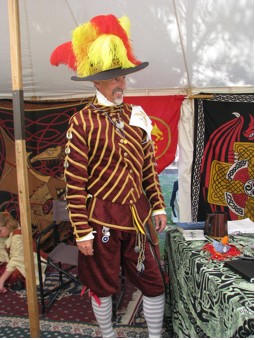 What is your registered SCA name?
Kelan McBride of Arainn

Do people usually call you something different?
If so, what? Hey, you? Just Kelan.

How many years have you been playing?
27 in the SCA, about 20 in rapier. (My how the time flies.)

Did you start by playing rapier? If not, in what area of SCA combat/study did you first start?
I started as an archer – we didn’t have rapier when I started.

Did you start playing in Caid? If not, where are you from?
I started in Caid. I went to the first Collegium classes offered for rapier. I learned to make rapier armor and how to use my finger as a sword (there weren’t enough epees and foils to go around).

Outside of rapier, what is your favorite SCA activity?
Golf – but if you mean in the SCA, I guess I’d have to say chatelaining. I like talking to people.

Why did you decide to pick up rapier fighting?
As I said, I was an archer. There just aren’t that many tournaments for archers. When I saw rapier I realized I could do that (I am physically unable to do heavies) and be able to play at every Caidan event. It also gave me the ability to experience some of what happened on the heavies field – the one-on-one combat and the chivalry.

What is your preferred weapon form?
Probably single sword. I was told a long time ago; get good at single and the rest will come along.

Who is your favorite historical sword master and why?
I don’t have a favorite. I mix Capo Ferro, Giganti, and Morrozo as the fight proceeds.

How would you describe your fighting style?
When I started out I was a mirror fighter; whatever my opponent did I mirrored. Now? I don’t fight much anymore. If I did I would be a defensive fighter staying at distance and looking for openings.

What was your favorite fight EVER and why (either tournament, melee, or pick-up)?
There are so many “no kidding, there I was…” stories over 20 years, I’m not sure I could pick one. My favorite fights are those where I enjoyed the fight, win or lose, and we both walk off the field sharing a laugh.

What is the single best piece of advice that you would like to give to new fighters?
Have fun. It is a game! Talk to your opponents and learn something from every fight. Be chivalrous and honest – it’s your honor on the line. I know that was more than one thing, but I believe they are all tied together.

What does being a Master of Defense mean to you?
I’ve never really thought about this. When the White Scarf was introduced to Caid we treated it as kind of a pseudo-peerage. We looked for top fighters, but we also looked for those who would meet the peerage requirements of the Knights, Laurels, and Pelicans. If I had to pick a meaning for me it would an acknowledgment we did things more right than wrong. As with the Caidan White Scarf, it is not just an award, it is a job description. We don’t stop doing what we were doing once we are elevated. That’s just the beginning. Of course sometimes age and health get in the way, but I can still give advice.

What does being a peer of Caid mean to you?
As I was a Caidan Pelican first, nothing changed. I am extremely honored to be recognized by Caid and can never really repay the confidence and support.

Are there any questions or feedback you’d like from the rapier populace?
Don’t be afraid to come to the MoDs with questions. We watch what’s going on in the eric, but we don’t see everything. We need to know if things are going well or if changes need to be made. We need to know who the fighters see as the next MoD and who are the leaders. All questions and feedback are wanted and honored.

What is one SCA-related thing most rapier fighters in Caid probably don’t know about you?
(can be fighting related or not– i.e. ‘I really hate fighting cloak’ or ‘my persona as originally constructed is actually Byzantine)
I don’t like cloak/cape, my original persona was early Celtic (being an archer), and I’m not really left handed…

Anything else you’d like to add?
I have really enjoyed my time in the SCA. But, like any other activity, you get out of it what you put into it. If your goal is to be a better fighter, you have to practice. If your goal is to make friends and have fun, just enjoy the game. Accolades come or they don’t, but our worth is not determined by the accolades. Your worth is in your friends and loved ones.