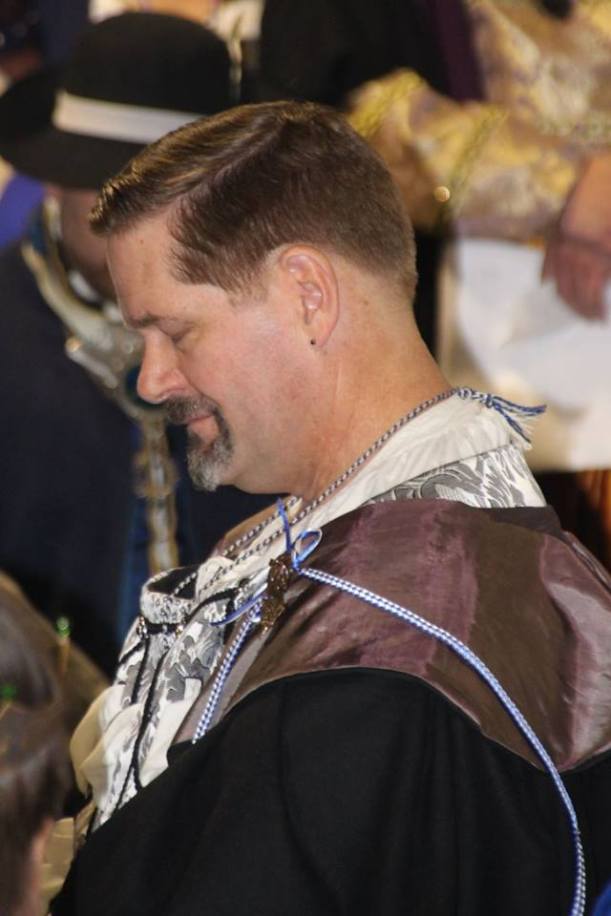 Do people usually call you something different? If so, what?
My name is pronounced ‘Owen’ – but I can always tell when a new field herald gets my card for the first time.

How many years have you been playing?
23 actively

Did you start by playing rapier? If not, in what area of SCA combat/study did you first start?
I joined the SCA because I heard they did historical fencing, though I later took up armored combat as well.

Did you start playing in Caid? If not, where are you from?
I found the SCA here in Caid.

Outside of rapier, what is your favorite SCA activity?
I enjoy leather working and storytelling.

Why did you decide to pick up rapier fighting?
I used to go to Ren faires and spend the whole day at the fencing booth, later I saw a rapier demo and I was hooked. There was something about the combination of speed and style that drew me.

What is your preferred weapon form?
I love them all, but sword and cloak is the most stylish.

Who is your favorite historical sword master and why?
I enjoy Agrippa’s approach to guards and Capo Ferro for style.

How would you describe your fighting style?
An energetic mashup of styles that feel right to me.

What was your favorite fight EVER and why (either tournament, melee, or pick-up)?
Some years ago, I attended a pas in the West (shortly after they had restarted rapier) and I was fighting a West fencer in one of the giant open fields that the West likes to use for erics.  The new prince of the West was in attendance and it was clear that the fighting wasn’t holding his interest.  When ‘lay on’ was called, my opponent charged in with a flurry of attacks – I was told later that I gave a gleeful ‘whoop’ of joy and responded in kind.  We took that fight all over that huge field – fighting the entire time.  We weren’t carefully moving into and out of measure, this was a nonstop string of attacks and counters that never slowed.  We ended up back in front of the prince, with my opponent throwing a beautiful high lunge from orbit…and I dropped underneath it.  My lunge came all the way from a desperate squat with my off hand on the ground.  At that precise moment, the prince jumped up off his throne and shouted “Now THAT was cool!”

What is the single best piece of advice that you would like to give to new fighters?
Give yourself time, don’t focus on winning, focus on your fencing.  Don’t analyze your fighting while you are fighting.

What does being a Master of Defense mean to you?
It means that I am seen as a representative of the rapier community as a whole – and I have to strive to be a role model and an active participant in our community.

What does being a peer of Caid mean to you?
The biggest difference is in the society wide level of the peerage, it’s not just a kingdom level thing anymore – it makes for a whole different flavor of responsibility.

Are there any questions or feedback you’d like from the rapier populace?
Can’t think of any off the top of my head – always feel free to talk to me at any event.

What is one SCA-related thing most rapier fighters in Caid probably don’t know about you? (can be fighting related or not– i.e. ‘I really hate fighting cloak’ or ‘my persona as originally constructed is actually Byzantine)
My SCA name translates into Heather’s Hound.