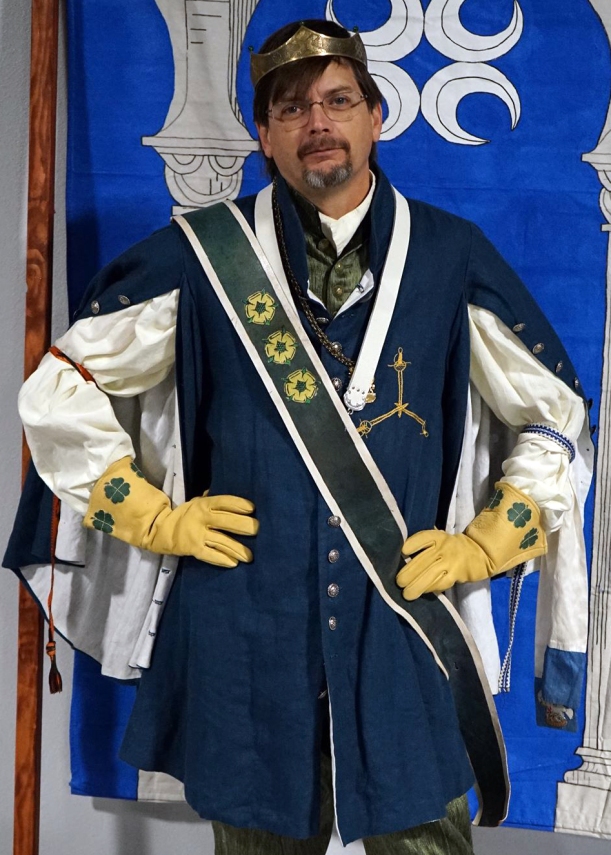 What is your registered SCA name?
Laertes McBride

Do people usually call you something different? If so, what?
Yes – but I don’t think it’s appropriate for an all ages website.

How many years have you been playing?
27 years. My first event was in March 1990.

Did you start by playing rapier? If not, in what area of SCA combat/study did you first start?
Yes, I was drawn into the SCA by rapier combat. Growing up I always wanted to be a musketeer, so it seemed a logical extension of that desire.

Did you start playing in Caid?
If not, where are you from? I started participating in the Kingdom of Ansteorra. I moved to Caid in June 1996.

Outside of rapier, what is your favorite SCA activity?
I enjoy dancing – but I don’t seem to get to do it enough.

Why did you decide to pick up rapier fighting?
So I could stab my friends and I thought it looked fun.

What is your preferred weapon form?
Rapier and dagger – although I enjoy fighting rapier and cloak.

Who is your favorite historical sword master and why?
Well, I’d say Saviollo since it’s the only style my fighting even slightly resembles. A little. Not much. Okay, maybe one stance.

How would you describe your fighting style?
I’m definitely a “SCA Rapier Combat” fighter. If someone is looking for teaching and training based on period texts and techniques – I’m definitely not the person to approach. While I understand and fully appreciate the forms dictated by period masters, it is not my strength. I became active in the rapier community before the emphasis and accessibility of period texts, and it’s tough to teach an old dog old tricks.

What was your favorite fight EVER and why (either tournament, melee, or pick-up)?
Hard to narrow it down to one. Over the years I’ve had the opportunity to fight many honorable and skilled fighters, face off against determined and larger number of forces on the melee field and simply enjoy testing myself against my friends.

What is the single best piece of advice that you would like to give to new fighters?
Have fun. If you’re not having fun, you’re doing it wrong. (And, if I had time to them a second single best piece of advice, it’s not to make your goal to win each fight. The goal should be to fight one’s best each time. If you win, that’s great, but if you lose then you use the experience to improve yourself. If all 20 people in a tournament set their goal to win it, there’s going to be 19 very disappointed and frustrated persons at the end of the day.)

What does being a Master of Defense mean to you?

To me it means that I am a member of the first peerage level order created in 40+ years. Along with the rest of the Order, we have the obligation and responsibility to live up the expectations, not only of the community, kingdom and society, but of ourselves. It’s to strive to be the role model for others and to be aware that decisions and actions taken now will shape how the order is perceived for years to come.

What does being a peer of Caid mean to you?
Well, as mentioned by Kelan, technically, I am a peer of the Society that lives in the Kingdom of Caid. In a broader sense, it means that when I travel out of kingdom I am extremely aware that I represent a portion of what Caid sees as a peer of the realm.

Are there any questions or feedback you’d like from the rapier populace?
I honestly enjoy hearing people’s opinions on the community, especially recommendations for people that deserve recognition!

What is one SCA-related thing most rapier fighters in Caid probably don’t know about you?
(can be fighting related or not– i.e. ‘I really hate fighting cloak’ or ‘my persona as originally constructed is actually Byzantine)
During my first four years of being authorized as a rapier fighter, I never made it past the second round. Talk about frustrating. However, I kept practicing and remained focused on making it over the hump and eventually things started to click.

P.S. If you want a larger dose of Master Laertes, he mundanely performs improv comedy every weekend at the LA Connection Improv Theater in Burbank.